The hardest part about weaving a scarf

…is taking a selfie of the finished product. Anyways, I’ve not found a place to paint, yet. I HAVE found a weaving class and a figure drawing group. Before I found these outlets I felt a little empty in beautiful Santa Barbara.

Back to weaving. The right scarf is my first experiments. The left scarf is like the length of 3 scarves and is me trying to be consistent with one pattern. I love combining colors and textures. It’s downright painterly. Plus I like scarves plenty.

Good news though I’m working on a rug. Easier to get a photo of the finished product.

My first show in Santa Barbara

Next week I’ve been here in Santa Barbara a full year. Its been a year of being a little unmoored artistically and in so many other ways. Anyhow the gears are still turning to mix metaphors and I’m currently the desk volunteer at the show for the next four hours. I have some art supplies, ideas and a bowl full of candy. Endless possibilities.

In conclusion one of my bird pieces from the last show I was in is up at Santa Barbara’s library and I’ve only had two pieces of candy.

I’m fortunate to be included in this show and I’m happy with the new work I just completed. Ill be posting in my painting page shortly. If you’re in Brooklyn between 12/3 and 1/4, have a drink and check it out. There will be a lot of great work.

Santa Barbara is the Belle of the Ball with Flowers in her Hair: The Series

I’m still in a bit of shock for living in a totally different place. To cope I started a series about it. This is drawing 2. I’m in the process of figuring out how I want to draw the flowers and plants that overwhelm me. Its not typically what I do. I miss my watercolors which are at my parents house with other supplies to be mailed out when I’m ready. I have great markers but the mixing is limited and I’d need a huge collection to get the pallette right. Still I should be able to make a shorthand.
This was a quick sketch I did on my lunch break. This is from a very large tree with massive flowers all over the tree branches. Still amazing.
Series will be posted on Flicker and my sketches page.

I stopped posting much after I got into Instagram plus the pressure of moving and finishing up the paintings for the show while saying goodbye to so many beloved Chicago people and places took a toll on my yoga and blogging discipline. I did better on the yoga truth be told, but anyhow I made it. The open studio, gallery opening are behind me and went well. The moving process is at its mid-point. Im in Santa Barbara but my stuff isn’t yet. Anyhow.

I first want to say thanks to all the love and support I’ve received.

Second here’s a couple of videos (sound off recommended its just a fan noise) from my open studio.

My open studio was fun and gratifying and quite a few paintings found a home.

The final packing and moving was exhausting,

And then the opening went great. Gallery 223 came together in a thrilling way. Katrina and Kip and their family have put their blood,  sweat and tears into the space and it turned out really well. I’m really honored to be a part of the show. Its up until August 20th.

Did I mention thank you? Thank you.

This one was tough 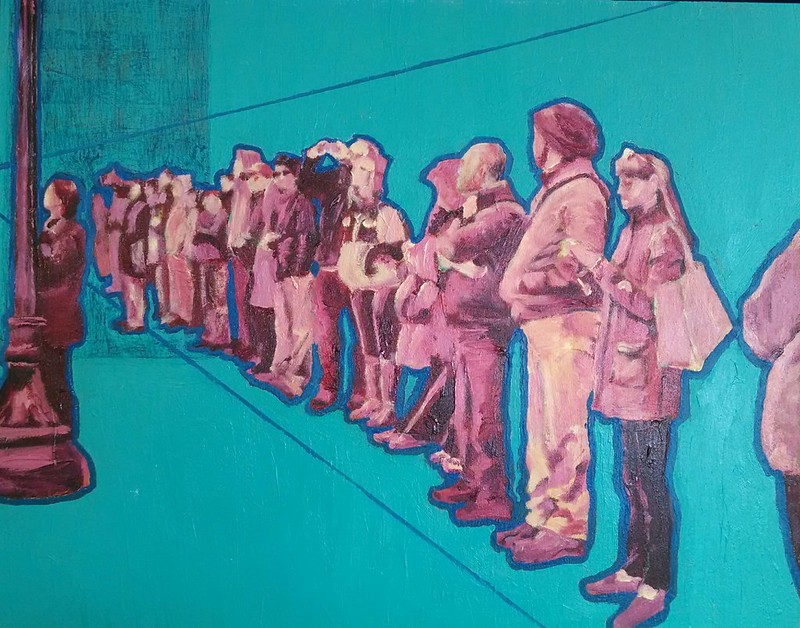 This background has had many iterations. Painted. Painted again.
Sanded. Repainted. Resanded. Reoutlined. The frustration was sustained but once I figured out what was bothering me the resolution tumbled out in a satisfying rush.

I messed up my days a bit. I don’t even know what happened to day 29. It doesn’t matter, it’s just my online journal. I’m able to let that sort of thing go pretty darn easily. Maybe I’d be more successful if I was tighter wound in this way, but I am a-ok letting this sort of thing go.

Anyhow my working out and painting happened but it was scattered and not at the normal times. At least I’ve figured out more moving logistics. A lot of time and energy was spent figuring out a few Linux issues for the very simple postcards I designed for the show. I like having a Linux system, but it requires some know-how and self-training. I am slowly acquiring the skills as they turn up, but I usually feel slightly harassed when I’m searching for how-tos in ubuntu forums.  I solved most problems with some time and patience, but one issue it turns out was not possible. I found an add-on to make Gimp convert images to CMYK but the conversion was atrocious. Joe reminded me that this is an open source software and the people creating this in their spare time had to prioritize and offset printing was not a priority. Wah. Wuh. My show postcard was saved by my friend and his fancy mac with the whole Adobe Suite. You win this time Apple and Adobe. 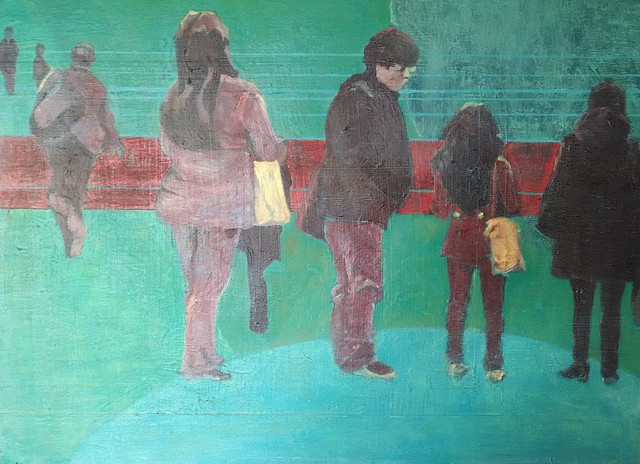 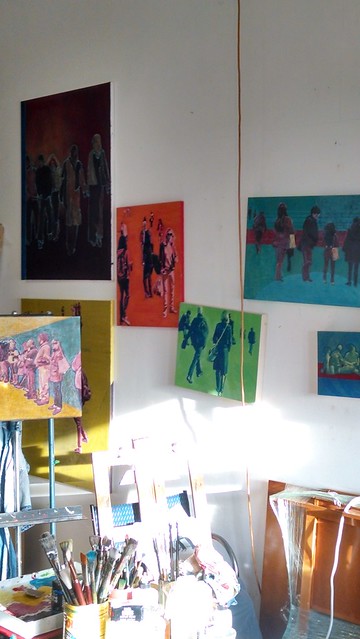 Did I miss posting Monday and Tuesday and Wednesday and now it’s Thursday? Hmmph. Getting soft.

Well during those days I worked out, painted, saw friends and decided on how will move and which company will do it. I just signed a lot of money away. At one point I seriously looked into doing it myself but it’s just as expensive. Anyhow I have a move date and a few finished paintings to show for my lack of postings

Last night I worked on a show postcard for the show in Mt. Vernon. I am still figuring out if I can pull off a Chicago open house too. Still very much TBD, but some things are in focus. Plus some work is done. 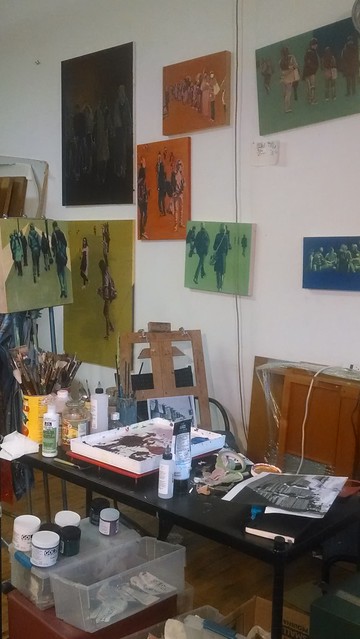 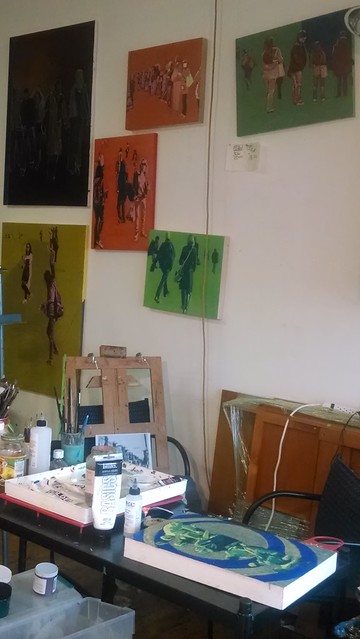 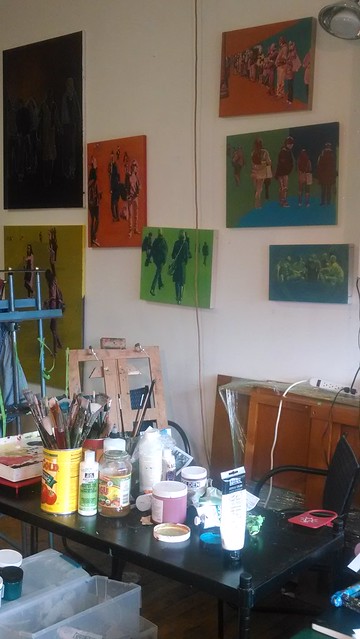 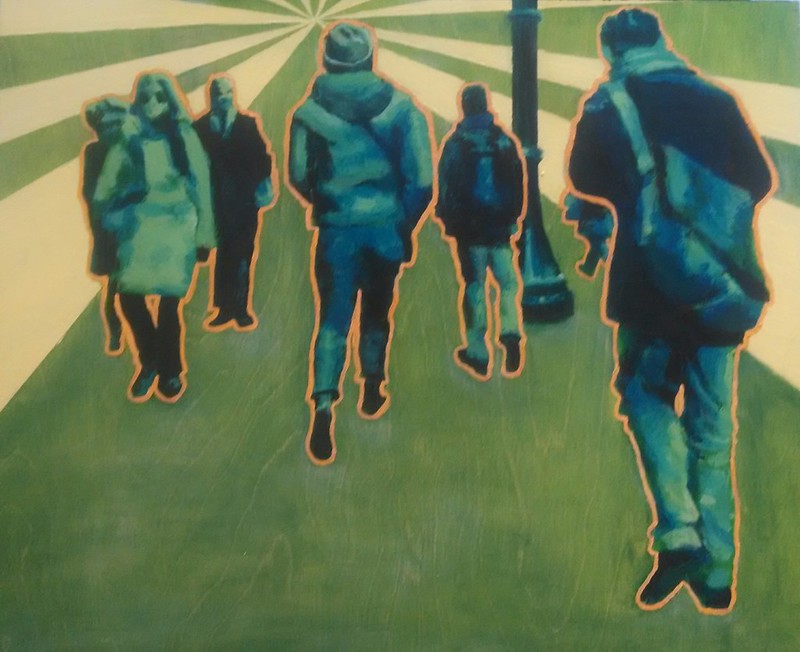 Friday I tried this yoga video that frustrated me enough that I quit 30min in. It was not very aerobic, but a confusing strength plank/balancing combo. I may try it again in a month. Maybe it was not the day for that video.

I did some work around the house because I had an appointment for a moving estimate and didn’t get to the studio until the afternoon. I did a few hours of work and then I had evening plans. I took my daily photo and it was disappointingly similar to Thursday’s studio shot. So, I’m including my Saturday time with Day 25 and calling it 25.5. Fascinating I’m sure.

This week it took me a bit to get back into the flow of things after a week of on the west/east coast slingshot trip. I’ve made some departures from my last painting push that I like. Moving plans are coming into focus somewhat but there’s still so much to do. 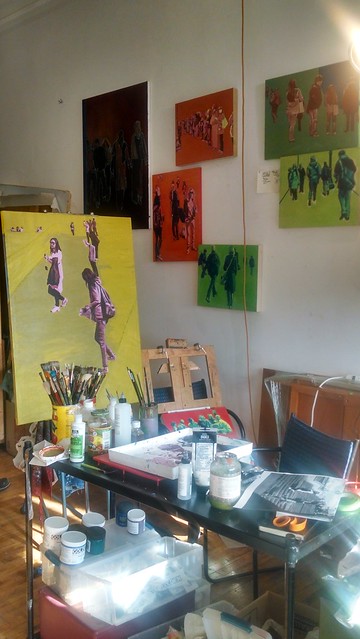 I skipped yoga to get to the studio faster. I had to come back to the house to get a movers estimate during the day and I wanted to get at it. On my way to the studio I had the delightful pleasure of seeing my bestie on the bus on his way to the brown line. I love the small town feel of neighborhoods in cities.

I did some painting on this bigger canvas and sketched out possible finishes to another painting, but then it was already time to go. I was asked to an impromptu lunch date with a group of friends. I was torn at first, but really this is a pleasure I won’t have very soon. So I met them and had a great time. Feeling really good about all the unexpected connections I made that day. Then I met the first moving estimator. Joe and I haven’t officially figured it out yet, but we will cull our stuff down aggressively.

Afterwards I went to the art supply store and bought some supplies. So expensive.  I read in de Kooning’s biography that when he was a confirmed success he used to stockpile art supplies in his home in Long Island. Always afraid of some downturn would leave him broke and having to scramble for Cobalt blue or something. I feel you de Kooning.

Today I have another move estimator coming at an awkward time. So I’ll hang home in the morning and then make my way to the studio in the afternoon. 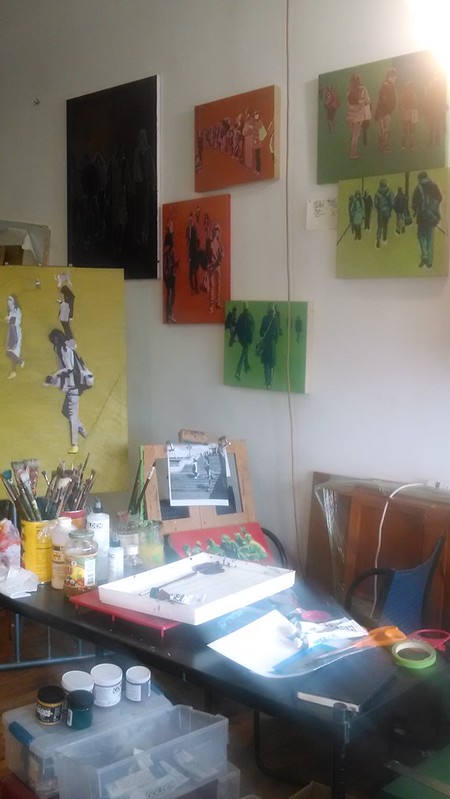